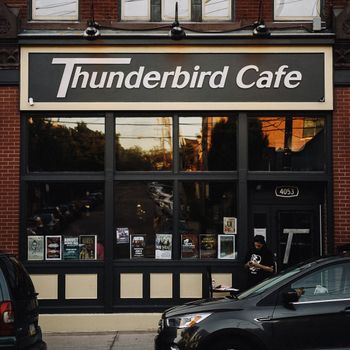 The newest configuration of the Thunderbird building has been in the works for some time. It was purchased by John and Ami Pergal, from Frank Michalski, in 2000. Shortly afterwards, the neighborhood bar underwent its initial transformation into a live music venue. Chris Lasky, local architect and friend of the business, designed the first expansion and assisted ownership with design throughout the latest renovation.

In its early years, John booked both local acts and notable nationals into the room, and the Thunderbird quickly became the home for live music in Lawrenceville. By 2009, the venue had attracted outside promoters, including Grey Area Productions, Joker Productions, and Manny Theiner, who helped establish it as a regular stop on the national circuit for smaller touring acts.

The Thunderbird began the most recent set of renovations in the summer of 2016 and is excited to unveil the finished product this summer. The new venue is booked by Roxian Live, and its events are typically co-presented with Grey Area Productions.

“We’ve expanded on what we originally created,” said Pergal. “Our main goal with these renovations was first and foremost to create a space that is great for both the performer and the patron. From sight lines to acoustics, hospitality to entertainment, the overall concert experience will be enhanced.”

The Café portion of the venue operates as it has in the past, as a bar / restaurant, open to the general public seven days a week. A small stage area in the back of the café is equipped to host solo artists and small acoustic ensembles.

The Music Hall portion of the venue represents a full-service concert production facility with a sizeable stage, multiple bars, lounge areas, food service, an elevator, and an expansive green room with amenities designed to meet the needs of the touring artist. Thunderbird Music Hall, at 380 capacity, represents the uniquely sized room that has been missing from Pittsburgh’s roster of concert venues. The programming encompasses a wide variety of genres, including roots & indie rock, blues, bluegrass, jam, jazz, funk and soul.