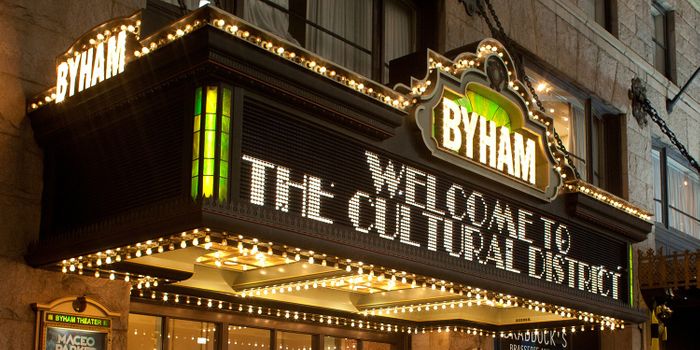 Originally built as the Gayety Theater, the Byham Theater opened on Halloween night, 1904. It ran for many years as one of the country’s foremost stage and vaudeville houses, with appearances from such stars as Ethel Barymore, Gertrude Lawrence and Helen Hayes.

In the entry vestibule, note the original mosaic tile floor and the many bare light bulbs lining the ceiling, evidence of the advent of electrical lighting. Backstage, the theater was one of the remaining few to use sandbags and hemp ropes to work the scenery rigging until 1999 when a modern rigging system was installed.

The Fulton Theater Facade In the 1930s, the theater was renamed The Fulton and became a full time movie theater. The Pittsburgh Cultural Trust purchased the theater in 1990 and following the first of four planned phases of renovation, the Fulton was reopened in May 1991. It was later renamed the Byham Theater through a naming gift from the Byham family following the second phase of renovation in 1995.

The old lighted Fulton marquee has been restored by the State Museum of Pennsylvania in Harrisburg and will be installed there as part of a theater exhibit.

The second phase of renovations brought new restrooms, box office, marquee, an elevator, lobby improvements and facade changes. In 1997, the Cherub Lobby was restored to its original splendor.

The third phase of renovation in 1999 updated the theater rigging system, enlarged the orchestra pit and provided new HVAC for the entire building. Excavation under the stage and seating area will provide space for future dressing rooms.

The Pittsburgh Cultural Trust continues to address the needs of the Byham Theater. These types of renovations are driven by the contributions of its attentive supporters, and with ongoing support the Cultural District will continue to improve and develop.