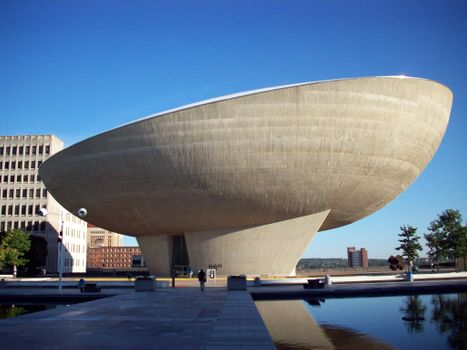 The construction of The Egg began in 1966 and was completed twelve years later in 1978. The Egg was designed by Wallace Harrison for all the people of New York State and to accommodate many events and performances.

Architecturally, The Egg is without precedent. From a distance it seems as much a sculpture as a building. Though it appears to sit on the main platform, the stem that holds The Egg actually goes down through six stories deep into the Earth. The Egg keeps its shape by wearing a girdle – a heavily reinforced concrete beam that was poured along with the rest of the shell. This beam helps transmit The Egg’s weight onto the supporting pedestal and gives the structure an ageless durability that belies its nickname.

The Egg houses two theatres – the Lewis A. Swyer Theatre and the Kitty Carlisle Hart Theatre. Seating 450, the Swyer Theatre is used for chamber music concerts, cabaret, lectures, multimedia presentations, solo performers and a majority of educational programming. With a seating capacity of 982, the Hart Theatre is used for larger productions including musical theatre, dance and music concerts. Wrapping around fully half The Egg is a lounge area for the Hart theatre. This space is ideal for seminars, receptions, after theatre parties and small cabaret type performances.

The building’s curved exterior defines the interior statement as well. There are virtually no straight lines or harsh corners inside The Egg. Instead, walls along the edge curve upward to meet gently concave ceiling light for celestial effect. The backs of performing areas are fanned – inviting one inward – providing an intimacy impossible in a conventional theatre. And throughout, walls of Swiss pearwood veneer add warmth and enhance the acoustics in the theatres.

Visually distinctive, yet ingenious The Egg is a beautiful synthesis of form and function. We invite you to use it for your organization – and hope you visit and enjoy it frequently.