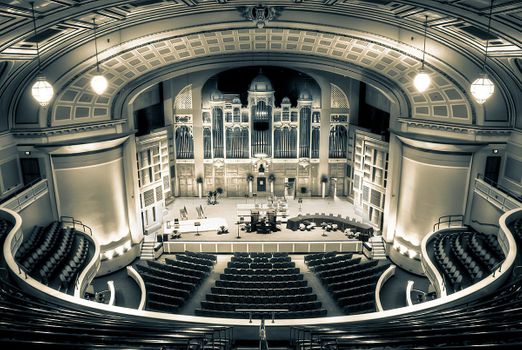 The Merrill Auditorium is a historic performing arts facility that is located in downtown Portland in Maine. This arena has a seating capacity of 1900 and holds a special place in the hearts of music lovers in and around Portland.

It was originally built in the year 1912 and has witnessed the performances of musical geniuses like John Philip Sousa, Vladimir Horowitz, George Gershwin, Jessy Norman, Alvin Ailey and the likes.

Since its restoration in the year 1997 The Merrill Auditorium has transformed into a melting pot, where diverse range of legendary artists have come together to put out memorable live concerts.BB King, Bonnie Raitt, Willie Nelson, Godsmack, Lyle Lovett, Gov’t Mule and Cake have performed in this arena and have set the stage on fire.

The Merrill Auditorium has been the cornerstone for all art and cultural activities in the local regions.It is looked upon with a lot of respect as it has seen numerous performances by legendary artists and performers from all across the globe. Ray Charles, Jessye Norman, Marilyn Horne have added their special touch by performing in this arena.