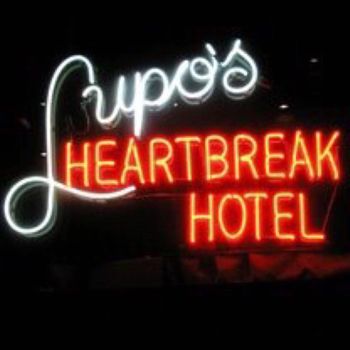 Lupo’s Heartbreak Hotel opened on September 5, 1975 at 377 Westminster Street in downtown Providence. Rich Lupo’s mission was to have people enjoy his 45 rpm records on some nights and to present live bands a few times per week. The ultimate goal of the club was to someday have Bo Diddley play there. It turned out that crowds only showed up on live music nights, so while the jukebox stayed, band nights soon expanded from three to seven nights per week.

The first national act at the club was harp player Big Walter Horton in 1975. The club leaned heavily on touring blues acts. With the help of booking agent and long-time friend Jack Reich, other styles of music also germinated. The Ramones appeared in 1976. Mr Lupo recalls with pride a teary eyed Joey Ramone gushing to him that the club had the grossest band room he’d ever seen. In 1977, Lupo’s had Bo Diddley week – 9 consecutive sold out shows with Bo backed by The Young Adults. Then more rock roll and blues legends appeared –James Brown, Roy Orbison, Jerry Lee Lewis, Muddy Waters, Iggy Pop, The Pretenders, The Go Gos, Stevie Ray Vaughn to name a few.

Unfortunately, in order to give way to condos, the club was forced to move from its first location in 1988.

Lupo’s reopened up the street in 1993 after renovating the old Peerless Department Store. The new club was larger and more concert oriented. With great sadness, the renowned men’s room trough was replaced with state-of-the-art urinals. People still recall the escalator – the stairway to nowhere.

The club was joined at the hip by The Met, a homey den for local bands as well as for smaller touring acts. Here customers saw early shows of many great bands such as Dave Matthews and Oasis.

In 2003 Lupo’s was again asked to move in order to give way to downtown gentrification.

In December of 2003 the third incarnation of Lupo’s opened in the Strand Building on Washington Street. This space is larger and even more concert oriented than the second club. More recent shows have been Wilco, Justin Beiber, Flaming Lips, White Stripes, Avett Brothers, Marilyn Manson and The Fray. The club shares this space with the Roxy nightclub, a separately owned business.

There was no room in this building for The Met. However, in 2010, our sister club, The Met, reopened 3 miles away in Pawtucket. Check out The Met at www.themetri.com