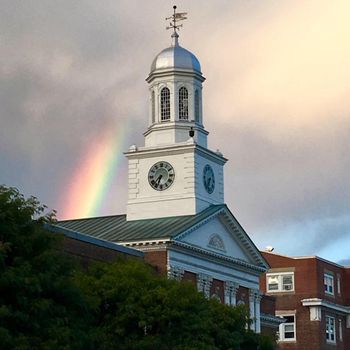 Lebanon Opera House (LOH), an historic 800 seat facility with superb acoustics, is the largest proscenium theater in the Upper Connecticut River Valley. The Opera House is located within Lebanon City Hall, a fixture on Colburn Park in the center of Lebanon. Since its dedication in 1924, the Opera House has served a myriad of purposes as a venue for vaudeville, traveling theatricals, and community events, and more recently for musical concerts and school performances.

In 1951 Lebanon Opera House was converted into the town movie theater, until it was closed down at the end of the 1960s with no plans for its future. It was brought back to life in 1969 by Lebanon High School music director Ralph Bowie, who, realizing its significance, took down the movie screen and scrubbed, mopped, cleaned, carpeted, and painted his way into an era of enthusiastically received high school musical productions. Bowie was joined in his efforts by local impresario Jack O’Connell, and, in collaboration with Dartmouth College, they managed to lure several professional productions to the theater. A remodeling of City Hall in 1975 paved the way for the pre-Broadway run of Moss Hart’s Light Up The Sky. For the next 16 years, the Opera House continued to serve primarily as a venue for school plays and musicals, community groups, and municipal meetings, with an occasional loan to Dartmouth for a bigger production.

After several cycles of activity and dormancy, the City of Lebanon recognized it could neither manage nor care for the facility by itself. Lebanon Opera House Improvement Corporation was established by the City Council as a non-profit organization in 1991, dedicated to realizing the full potential of Lebanon Opera House as a multi-faceted community resource for the entire Upper Valley. In 2002, LOH successfully completed its most comprehensive physical renovation to date, as well as a year-long strategic planning process culminating in a detailed five-year business plan. LOH’s first major capital campaign (2000-2002) to fund theater renovations generated a groundswell of community support for the Opera House. More than 1,000 individuals, foundations, companies and other constituents participated to raise more than $750,000. The resulting synergy of physical improvements, heightened public attention and enhanced programming has significantly impacted attendance and utilization of the facility.

Currently, the Opera House hosts rehearsals and events an average of 280 days annually, bringing live arts experiences to over 60,000 people who participate in LOH-sponsored events, community arts organization productions, benefits for other local non-profits, educational workshops and student productions. There is hardly a single elementary, middle or high school student in the Lebanon School District who has not either performed or attended a performance at the Opera House. Over 70 days each year, Lebanon Opera House serves as the district’s primary rehearsal and production space. Many Upper Valley non profits—including David’s House, Upper Valley Haven, Children’s Hospital at Dartmouth, LISTEN, Child & Family Services, and others—take advantage of LOH’s excellent facilities and sliding scale rental fees to produce effective fund raisers for their organizations. LOH coordinates the presentation of numerous productions staged by a variety of community arts organizations. Four of the most active—North Country Community Theater, NorthEast Shakespeare Ensemble, Opera North and City Center Ballet—draw over 15,000 patrons annually. Attended by 8,000 – 10,000 students and teachers each school year, LOH’s Youth Education Series (YES!) has established a prominent role in school curricula while providing classes the opportunity to work with world renowned artists in their own classrooms. The organization’s outreach program—Operation Open Invitation to the Arts—distributes of hundreds of tickets each year to Upper Valley social service agencies, enabling underserved adults and at-risk youths to attend live arts and cultural performances.

Throughout its colorful history—from meeting house, to movie house, to the active, year-round, fully renovated performing arts facility it is today—Lebanon Opera House has come a long way in 84 years. The Opera House’s recent renovations have been a catalyst for community economic development, leading a renaissance of Lebanon’s downtown. Economic impact studies conducted by the New England Council indicate that Lebanon Opera House now generates more than $5 million in collateral economic activity in the Upper Valley region each year. In the wake of significant post-renovation organizational growth, LOH’s mission statement was revised during its second strategic planning process in 2006-07 to more adequately reflect the organization’s broader purpose and business.