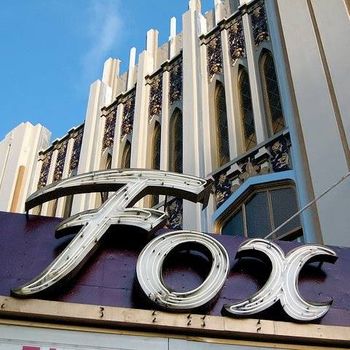 The Fox Theatre opened its door to the public on January 2, 1929 as The New Sequoia Theater by Ellis John Arkursh to show motion pictures. Touring Europe Arkush gathered all of his favorite architectural details from various venues to create the Moorish feel and style on the inside and the gothic feel on the exterior which was executed beautifully by the Reid Brothers of San Francisco.

Used mainly for motion pictures the theater was purchased by the Fox West Coast Chain only a few months after the opening and it continued to be used for movie attractions for a number of years until the theater was closed for renovations in June of 1950 for 4 months before re-opening its doors September of 1950 for live performances and shows.

After its renovations the theater became a popular venue for many incredible artists such as Vanessa Williams, Etta James, Bill Cosby, Neil Young, Melissa Ethridge, BB King and many others.

In 1993 the theater was inducted to the National Register of Historic Places and it is now getting ready for a Grand Re-opening to continue the legacy of the Fox Theatres and to bring life back to Redwood City. In 2009 the theater went dark and now in 2010 the doors will once again open to bring it back to life.

In the summer of 2010 the Fox Theatre Redwood City was purchased by local entrepreneurs Eric Lochtefeld and Lori Lochtefeld, along with Eric’s company Dream Careers Inc. Eric Lochtefeld had a dream of one day owning an entertainment venue like the Fox and Lori has a dream of helping downtown Redwood City reach its full potential on the real estate front. They are both extremely excited to bring the Fox Theatre back to life.