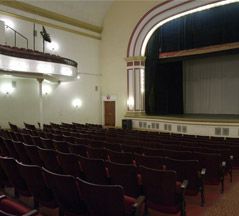 The Andrew Carnegie Free Library & Music Hall (ACFL&MH) sits graciously on a hill above Carnegie’s Main Street. The facility houses a fine regional library, an acoustically excellent music hall, studios, a lovely reception hall, and—a true national treasure—its Civil War Room. The Thomas Espy Post of the Grand Army of the Republic is one of the seven or eight most intact G.A.R. post in the country.

The historic landmark ACFL&MH is one of only four libraries in the United States endowed by famed industrialist and philanthropist, Andrew Carnegie. (Braddock, Homestead and Duquesne – the last, sadly demolished – where Carnegie had steel mills, are the others.) In the early 1890s, the leaders of what were then Chartiers and Mansfield approached Mr. Carnegie and offered to merge into a new town in return for a library. The borough of Carnegie incorporated in 1894. Ground was broken for the Library in 1899. The ACFL&MH opened its doors in May 1901 and has been proudly serving its community ever since.

View Events at This Venue