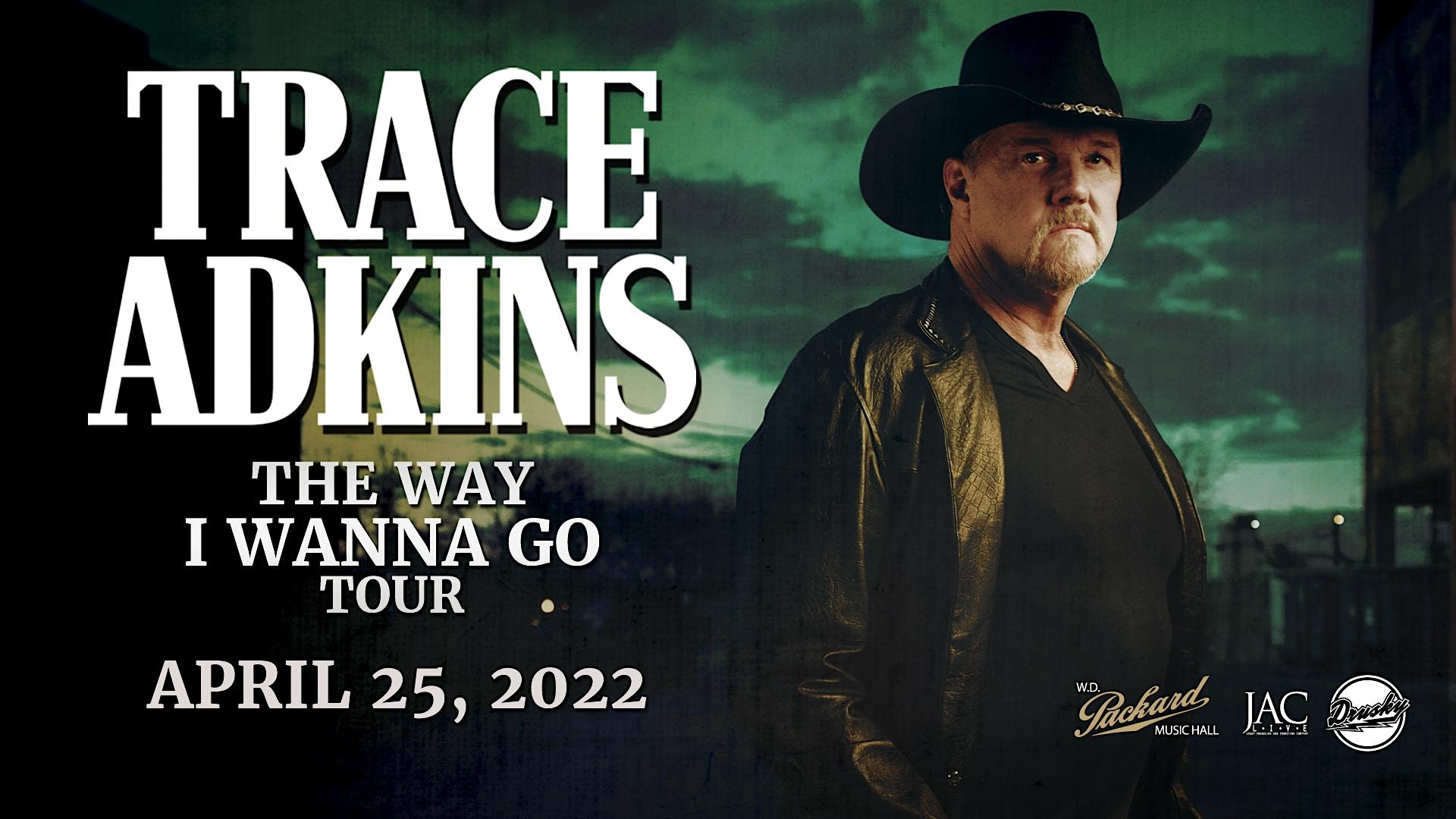 Tickets go on sale Friday, November 8th at 10AM!

About Trace Adkins: A Nashville icon for more than two decades, Trace Adkins has made his mark on thecountry-music industry. 11 million albums sold. Time-honored hit singles. Momentous,fiery and always memorable live performances. GRAMMY nominations. CMT and ACMawards. Nearly 200 million plays on YouTube. Hell, even a slew of movie and TV roleshave come the Grand Ole Opry member’s way. But ask Adkins what’s left to prove in hiscareer and the small-town Louisiana native says it’s simple: the itch remains. To create.To collaborate. To continually feel the excitement that comes after whipping up a newsong out of thin air and laying it down to tape. It’s what, after all these years, he says hestill craves. “It’s an adrenaline rush and I love it,” says Adkins, who is back in the studioworking on a new project. “There’s nothing else like that,” the Louisiana naive offers.“That is still my favorite thing to do in this business. Go into the studio with just somelyrics and a melody and then let the finest musicians in the world help take it and turn itinto something magical. It liberates me. I just dig it!”

Working with some of Nashville’s most respected songwriters, Adkins continues to findways to connect with his fans through music while recording what he describes asautobiographical songs throughout his career. “Over the years people have asked me‘How could we get to know you?’ Well, if you really wanted to know who Trace Adkinsis go back and listen to the album cuts on the records I’ve done over my career. Those arethe songs that reflect where I was in my head at the time I made that record.”

It’s an interesting change of perspective for Adkins, however, when he hits the road for aslew of his now legendary live gigs. Where the studio offers him unique insight into hiscurrent state of mind, onstage, when revisiting his classic songs like “You’re Gonna MissThis” or “Every Light in the House” nearly every evening, he says he’s taken back, ifonly for a brief while, to earlier moments in his life.“

It’s hard to describe, I gotta be honest,” he says of being overcome with emotion andreflection when trotting out some of his time-tested cuts for adoring audiences. “I’vegotten to the point now where I’ll be onstage singing ‘Every Light In The House Is On’and I look down at the crowd and realize that person right there wasn’t even alive when I recorded that song.” He laughs. “To watch their face go, Oh, that’s a cool hook, it’s like ‘Oh my god, that’s the first time that person ever heard that song!’”

Adkins says he’s profoundly touched that he serves as an inspiration to a youngergeneration of country artists, much in the way he revered icons like Johnny Cash andMerle Haggard when first moving to Nashville. “I dig it. I want to be in that position,” hesays of taking the reigns as an elder statesman of the genre. “I want to be looked at thatway. I want those guys to think and know they can walk up to me and ask me anythingand know that I’m here for them and I’ll help them however I can. I relish that position.

With one million followers on Spotify and over one billion spins on Pandora (10 millionspins per month), the longstanding country icon has yet to lose any of his trademarkpassion and killer instinct for his craft. The 57-year-old is as fired up as ever to be backon the road this year, taking his music to the fans once again. “I get a kick out of it. I stillenjoy the camaraderie, the band of brothers, your crew and your band. I’m an old jock. Ilike team sports,” he says of a continued passion for touring. “I like it when the new guyis closing for me and we turn it up a notch or two and just absolutely kick his ass. You goout and put a boot in somebody’s ass!”

Ask Adkins where he goes from here and he’ll say it’s quite simple: keep doing what heknows and loves. Performing. Creating. Inspiring. He adores it. And, he adds, he knowsso many of his lifelong fans, and new ones to boot, do too. “I’m gonna go out there andfind those people,” he says with a laugh of the coming months. “I’m gonna bring a bandand turn it up real loud! And we’re gonna have a good time!”